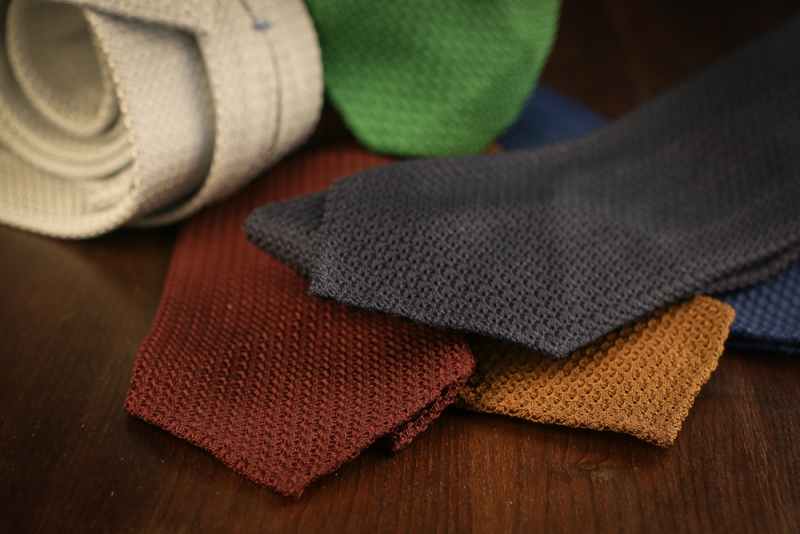 We love Grenadine ties and we know many of our customers share our passion for this light and crisp weave.

There are only two mills in the world that still have the old looms (more than 100 years old) and the know how of how to weave the Garza Grossa and Garza Fina fabrics. The looms themselves, on which this beautiful fabric is woven, are made of wood and highly trained technicians manage and mend them because there are no new looms produced today. This also means that the amount of fabrics produced during one year is fixed. Let´s say you would like to add a specific shade of orange into production, the factories need to decide which color to take out or make less of. Keep in mind that it takes about one hour to weave one meter of the Grenadine fabric.

So, what about the weave itself. There are two main textures, the Grossa and the Fina. Read more about them below.

Garza Grossa is the larger of the two weaves (translated into english it means
"thick gauze") - Ties in the Garza Grossa Grenadine weave are often thought of as more casual in style eventhough they are mostly made of pure silk. The Garza Grossa ties makes a slighty larger knot than the Fina and works perfectly with a odd jacket, business shirt or perhaps a denim shirt. The Grossa weave is also great with a sophisticated suit, here the larger weave will make a interesting contrast against the suit fabric. 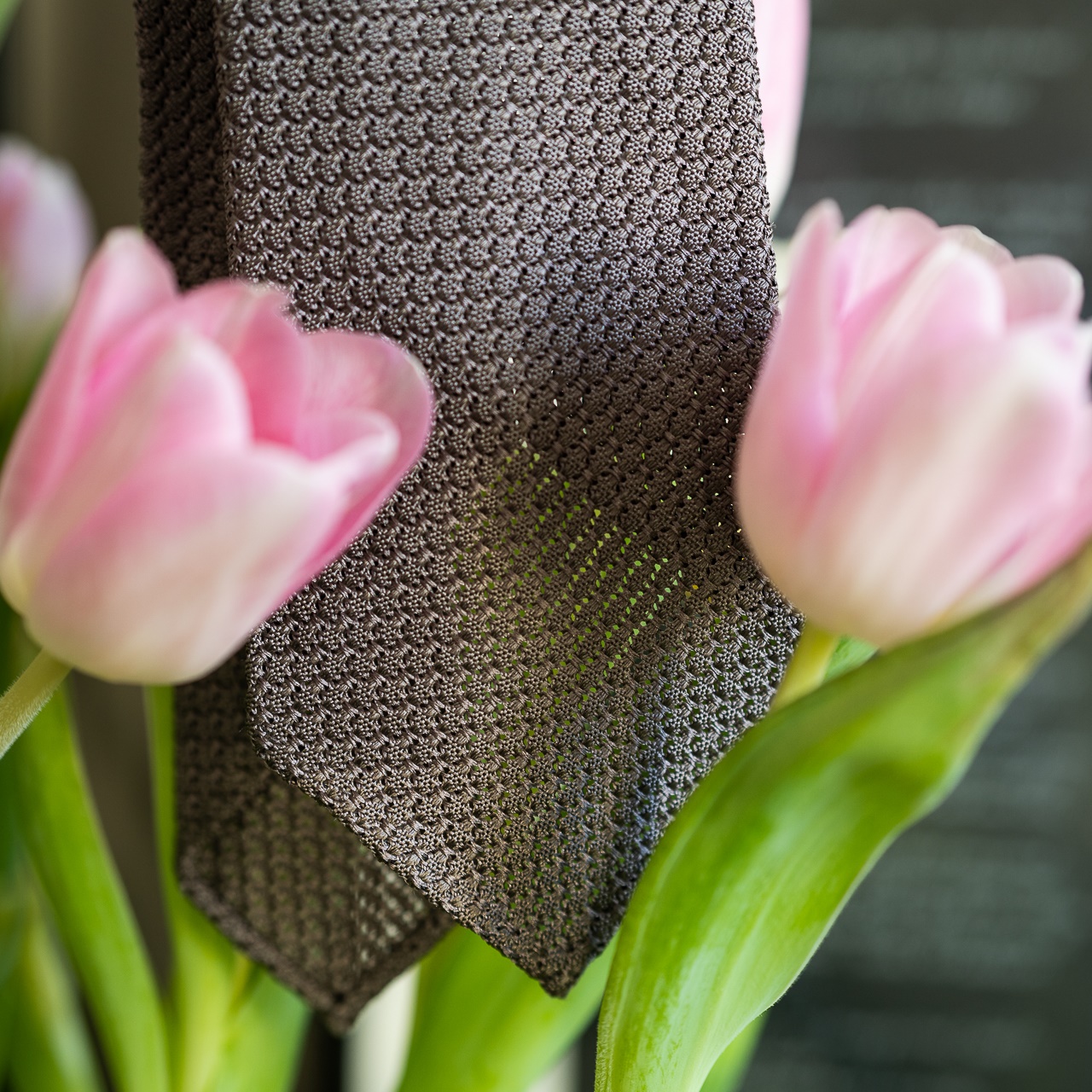 Garza Fina is the smaller and tighter of the two weaves (translated into english it means
"Fine gauze") - Ties in Garza Fina Grenadine weave are lighter in feel and makes a slightly smaller knot. The Garza Fina ties are in general more used in business and even weddings as the weave does´nt "stand out" as much as the Garza Grossa weave do. The Garza Fina Grenadine tie is normaly the first step into the world of Grenadine neckties, it´s the safest way to start since it is the most versatile of the two. 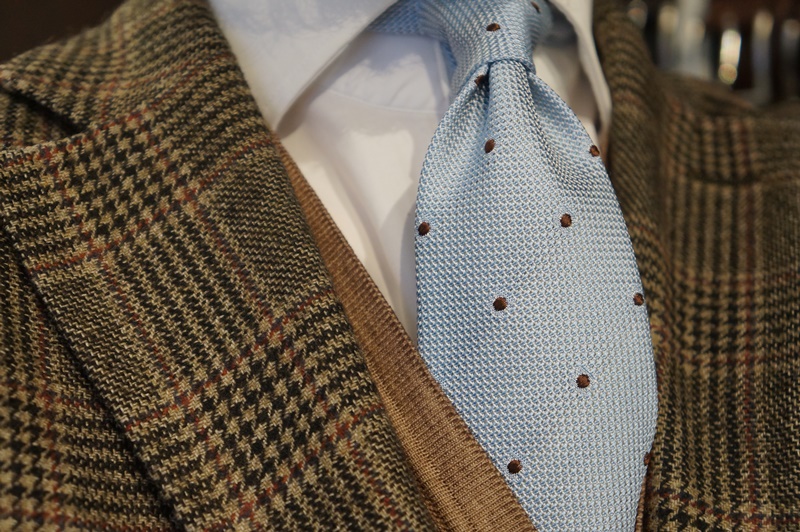 Mixed Grenadine weaves - There are many mixed weaves, for example the Grenadine and Shantung (Shantung aka raw silk woven into the Grenadine weave) which makes a great casual tie due to it´s texture and allmost vintage like feel. Another one is the Grenadine Jacquard (Jacquard is the most common weave in silk ties today. If you see a silk tie with woven dots, its most certainly a jacquard weave). The Grenadine Jacquard ties also have a nice texture to them however not as rough as the Grenadine Shantung. These ties also work great for less formal outfits. Let´s say you work in an office where nobody wears a tie, then a Grenadine Shantung tie can add some spice to your style without being over the top. 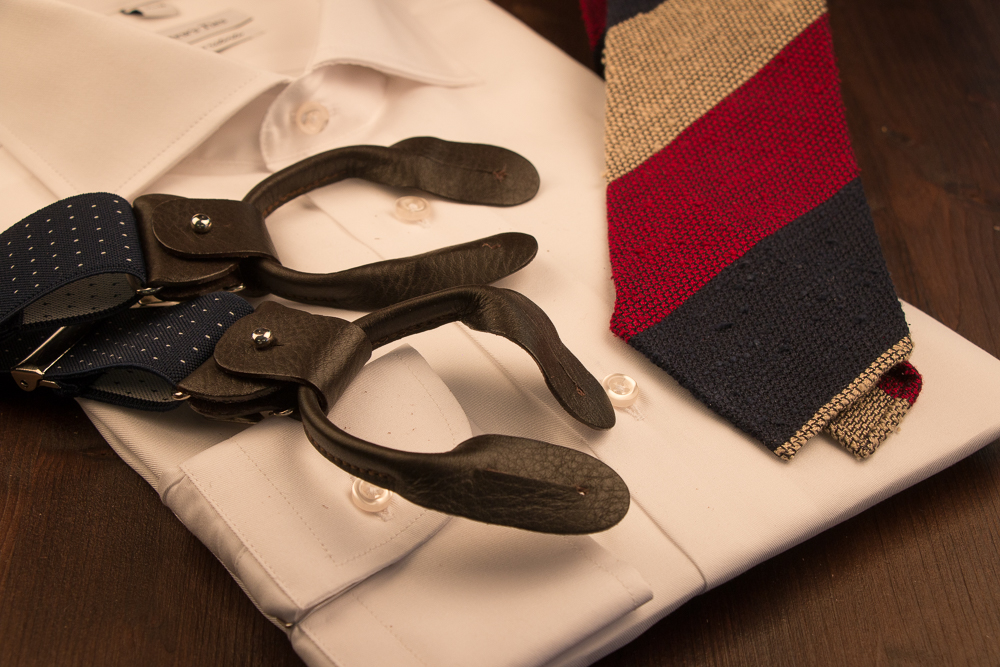 Granqvist buy Grenadine fabrics from both the two remaining weavers which are situated in Como, Italy. Como is well known as the capital of silk. Our Grenadine ties are produced in the south of Italy by a family run company which started in the late 70´s. Here, they make some of the best ties in the world. Premium accessory brands tend to produce their neckties here and when you see and touch one of their Grenadine ties you understand why. Experienced artisans in combination with knowledge of tie making which you of course take for granted but beware, most tie makers out there have never worn a tie themselves and therefor know very little about how the drape and knot etc will be and especially, should be. Together we have come up with an exact interlining and a perfect shape and construction of the tie to ensure the best possible feel and to have a great tight fourinhand knot. This is why our Grenadine ties are made in a fourfold construction, with a partial light interlining togheter with the oh so important handrolled ends. We have made thousands of ties in this factory and we cant say that we have ever been disapointed, rather the opposite.

We want to bring our customers premium italian made Grenadine ties without the hefty price tag you see at most stores.